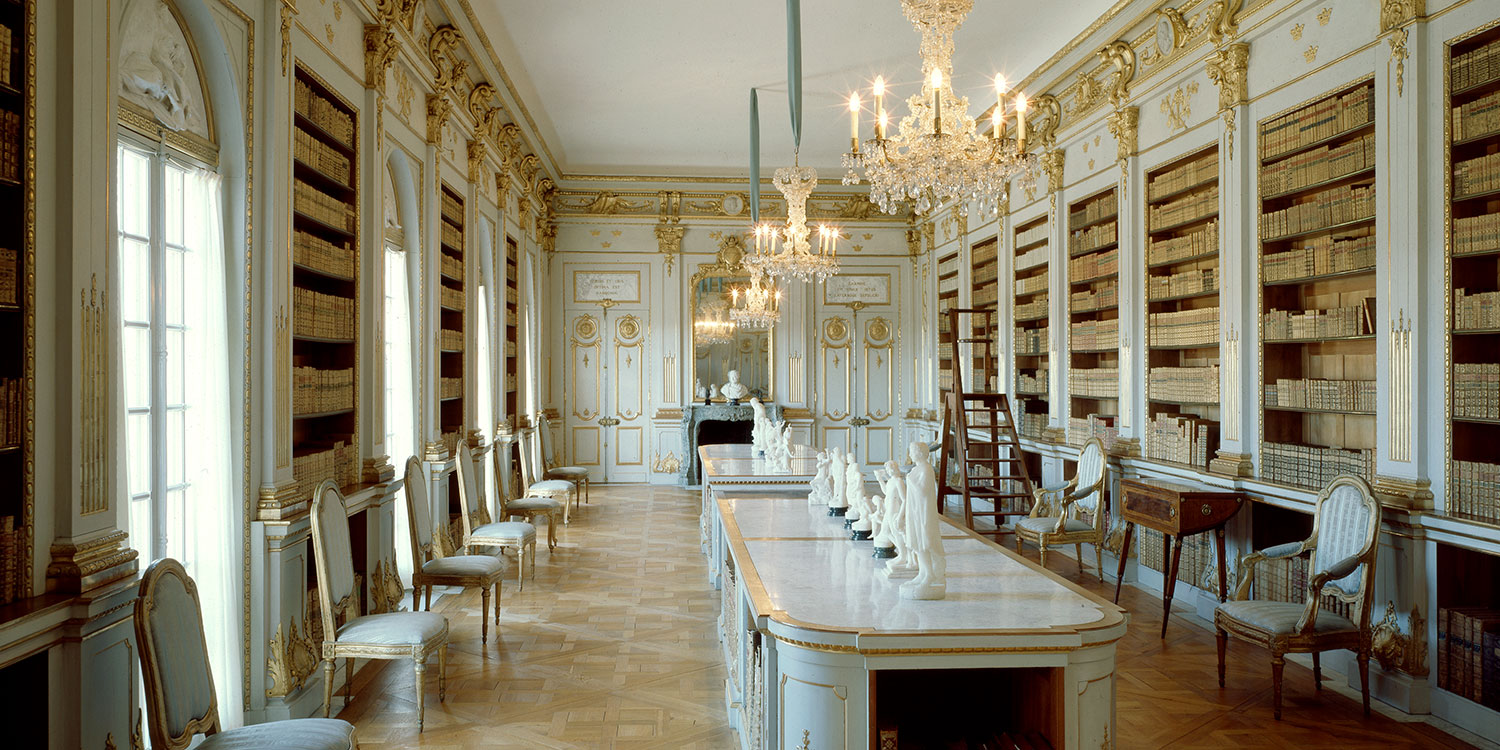 A history of style – Rococo

A new era – the Age of Liberty, the time of the playful Rococo – dawned in Sweden in the mid-18th century. The Caroleans had been replaced on the throne by a new royal couple, Lovisa Ulrika and Adolf Fredrik, who ushered in new interiors in the fashionable Rococo style.

Nicodemus Tessin the Younger died in 1728, before the completion of the Royal Palace. He had appointed his promising student, Carl Hårleman (1700–1753), as his successor. Tessin had applied for funds from the palace building deputation to pay for Hårleman's training in Europe, where he became acquainted with the latest stylistic ideals and studied ecclesiastical architecture.

Hårleman made contacts in France and Italy while studying there, which proved useful when, as his former master's successor, he continued work building the palaces and needed skilled craftsmen and artists to produce interiors during the 1730s and 1740s.

Hårleman followed Tessin's plans for the Royal Palace closely in terms of the layout of the rooms and the use of spaces, but needed to introduce contemporary fashions for the interiors and furnishings.

In Europe, the period that had been dominated by the Thirty Years' War and its aftermath had been superseded by the playful, hedonistic Rococo, or le goût nouveau. In Sweden, the Age of Greatness gave way to the Age of Liberty. The Caroleans were replaced on the throne by a new royal couple, Lovisa Ulrika and Adolf Fredrik of Holstein-Gottorp. The queen's brother was no less than King Frederick II of Prussia, and the strong-willed queen had expensive tastes, an eye for fashion, great pretentions and very little patience. Hårleman faced considerable pressure to produce grand interiors that would appeal to Lovisa Ulrika in the enormous palace.

Rococo and chinoiserie at Drottningholm

While waiting to move into the new palace, the royal family divided their time between the King's House on Riddarholmen and Drottningholm, where many highly expressive, exquisite Rococo interiors created for Lovisa Ulrika remain to this day.

The Swedish East India Company was established in 1731, brining all manner of exciting novelties back from China. The Chinese Pavilion at Drottningholm is the best preserved coherent example of the Rococo passion for chinoiserie in Sweden, and is open to the public during the summer. Highly skilled master furniture builders such as Nils Dahlin produced Rococo pieces using Chinese lacquering techniques, unparalleled within their genre in the history of Swedish furnishings.

A new palace in the French style

Back in Stockholm, interiors and fixtures needed to be prepared for the Royal Palace. The palace's many rooms intended for different purposes required large volumes of furniture, which had to be supplied quickly. Sculptors produced decorative interior elements, such as wall panels and door lintels, as well as furniture and other fixtures.

The very latest furnishings were purchased from France to be used as models by Swedish chairmakers. French chairmakers and sculptors also travelled to Stockholm, to produce pieces and to teach their skills to the local craftsmen, some of whom travelled to Paris to study. French influences were expressed in customs and fashions, and in interiors and styles, although the Swedish Rococo came to assume a degree of restraint under Hårleman's editorship.

French and Italian artists came to Sweden in the 1730s and 1740s, both to paint and to teach Swedish artists. In 1735, French artist Guillaume Thomas Taraval (1701–50) became the first teacher at the Academy of Drawing, which was established at the palace to convey knowledge and technical skills to Swedish practitioners of an artistic inclination. The Academy of Drawing was the forerunner of what is now the Royal Academy of Fine Arts. 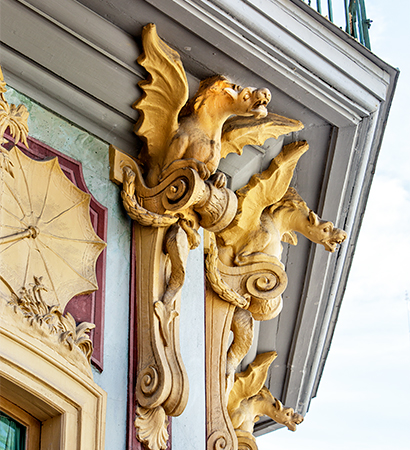 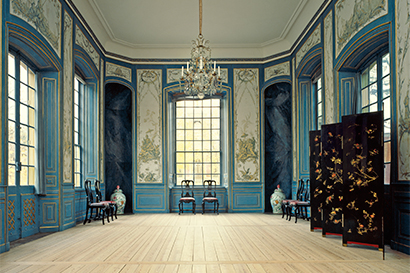 The Chinese Pavilion is the best preserved coherent example of the Rococo passion for chinoiserie in Sweden. Rococo furnishings were created using Chinese lacquering techniques by craftsman including the master furniture builder Nils Dahlin. Photo: Royalpalaces.se 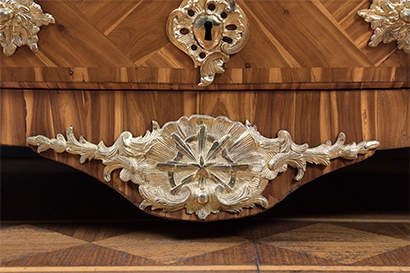 Rococo bureau with amaranth veneer and suspended central section featuring the Polar Star. Probably created by Samuel Pasch in 1744 for Queen Lovisa Ulrika's bedchamber at the King's House (the Wrangel Palace, which was the royal residence from 1697 to 1754). Photo: Lisa Raihle Rehbäck 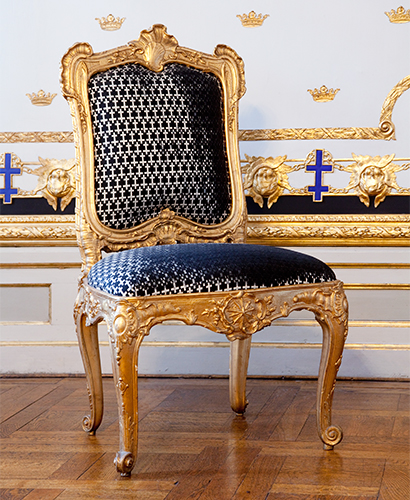 The chairs in the Hall of the Order of the Seraphim at the Royal Palace showcase soft, rounded Rococo lines and first-class carving, in this case courtesy of Jean Caspar Caillon, one of the French sculptors working at the palace during the 1740s. Photo: Per Magnus Persson

ROCOCO AT THE ROYAL PALACES

TYPICAL FEATURES OF THE ROCOCO STYLE

Rococo is characterised by soft, curved forms in asymmetrical harmony. The name derives from the French Rocaille style, whose seashell forms are a frequent theme in Rococo. Dragon wings, floral tendrils and vegetative, graceful ornamentation are also common. Right angles are softened up with rounded corners, and straight lines are replaced with soft curves. Pastel tones make up the main palette, alongside exotic Chinese colours which are reproduced in black and lacquer red, for example.