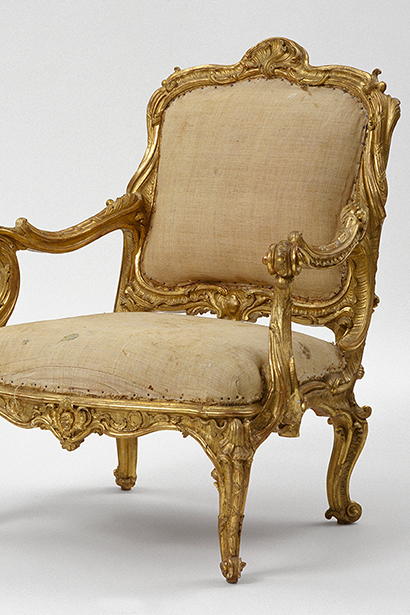 Click on the image to see the full version. Photo: Royalpalaces.se

Spiral turned baroque chairs from the time of Queen Dowager Hedvig Eleonora can be found at Drottningholm. These were no doubt seen as old-fashioned when, in 1744, the young Princess Lovisa Ulrika moved in. She had both the décor and the furnishings updated.

Despite the ban on imports, Lovisa Ulrika managed to furnish several rooms with elegant French rococo chairs. A richly carved, finely gilded armrest chair which is currently in storage previously stood in Lovisa Ulrika's salon. It has been branded with Lovisa Ulrika's stamp of ownership beneath a closed crown and 'Kr.DH' – the Crown of Drottningholm.

Like ceremonial chairs at the Royal Palace of Stockholm from the same period, it is made from beech and the carving would have been carried out by one of the sculptors who worked on the palace.