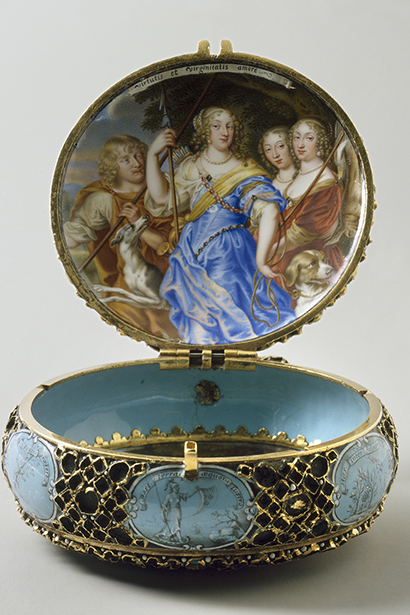 This clock was a gift to Queen Kristina from Magnus Gabriel de la Gardie. It is made of gold and covered with enamel paintings by French miniature artist Pierre Signac, which were produced in either Paris or Stockholm in 1646. The clock no longer has its mechanism or the 575 jewels that once ornamented the case.

The image is a tribute to the queen's reign. The inside of the lid shows Queen Kristina as Atalanta, attended to by de la Gardie as Meleager, from Greek mythology. The painting also depicts the queen's half-cousins Maria Eufrosyne (the wife of de la Gardie) and Eleonora Kristina.

When the queen left Sweden in 1654, she gave the clock to Maria Eufrosyne. The clock then came into the possession of Queen Lovisa Ulrika around the mid-18th century, and was subsequently kept at Drottningholm Palace.

The Royal Palace of Stockholm
The Guard's Hall, where items from the Treasury Collection are on display