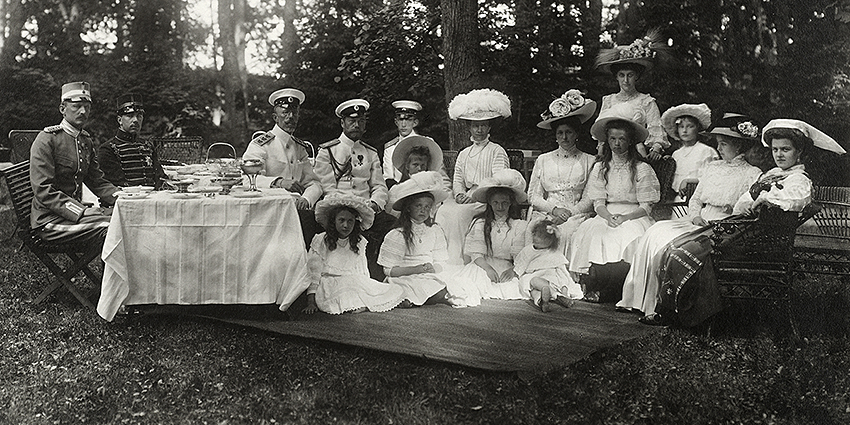 The czar's family visit their relatives

However, this event was not perhaps as surprising as one might initially think. The Swedish Royal Family was related to the Russian czar's family, including through Queen Victoria and Crown Princess Margareta, and the previous year King Gustaf V and Queen Victoria's second eldest son Wilhelm had married the Russian Grand Duchess Maria Pavlovna. So apart from the inevitable pomp and ceremony that always followed the czar's family, this was partly a family visit.

Tensions were bubbling under in many parts of Europe at the turn of the twentieth century. While many of the wealthy lived in provocative luxury, the great masses of workers survived under miserable conditions. A wave of assassinations swept across the continent. In Stockholm, a Swedish officer in parade uniform was shot by an anarchist who probably mistook him for the czar. The evening before the czar's family arrived at Tullgarn, a group of detectives was therefore engaged to search the palace and secure the grounds. Several Swedish constables subsequently received Russian honours for their efforts.

Following military honours including flags, parades and national anthems, the czar's family were finally able to step ashore at Tullgarn Palace. At half past midday it was time for a long-awaited lunch inside the palace, followed by a slightly more relaxed activity at half past two: a picnic and a walk in the beautiful palace grounds, with its canals, islands, bridges and flowers. This was deemed suitable even for the younger royals.

The czar had brought all five of his children with him: Olga, Tatiana, Maria, Anastasia and five-year-old Alexei. At half past six, the czar and his wife hosted a 'family dinner' on board the Standart, and at ten o'clock the czar's family departed with all the related honours.

A Russian painting hangs in the billiard room at the palace, depicting the departure from Tullgarn on 28 June 1909. This was the last time the czar's family visited their relatives in Sweden. The Russian Revolution broke out in 1917, and a year later the czar's entire family had been assassinated.

Find out more about Tullgarn Palace

Find out more about the Palace Park

Follow along on a guided tour and hear about the palace’s royal history, the history of the building itself and the preserved furnishings.

For larger groups we recommend a pre booked guided tour with your own guide. Tullgarn palace can be booked May–September.

Tullgarn Palace has been used regularly as a royal summer residence. Duke Fredrik Adolf, King Oskar I and Queen Josefina, and King Gustaf...

Strolling through Tullgarn Palace Park is like taking a walk from the 17th century through to the 20th century, from Carl Hårleman's aven...

Tullgarn Palace Park has an inn and a old stable housing a visitor's centre with a palace café and a Royal Gift Shop. Tickets for palace ...

The "Tyllegarn" estate is already mentioned in medieval documents, but the first Palace only built in the late 16th century, for Count Ca...

Information due to the pandemic

The Royal Palace and Drottningholm Palace are open for visitors, according to current recommendations. All guided tours and certain progr...

King Gustaf V, Queen Victoria and their children spent many unforgettable summers together at Tullgarn Palace in the Trosa Archipelago.